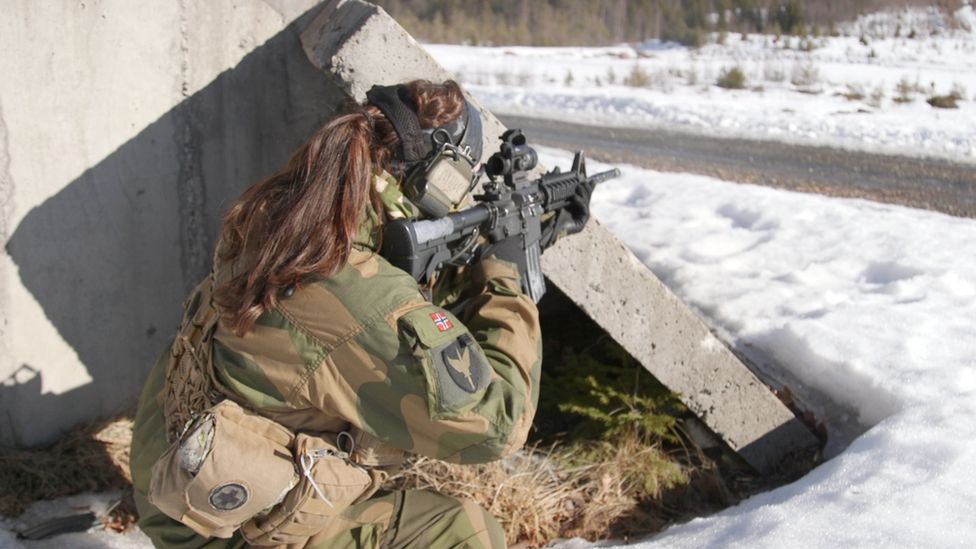 She's marched for miles carrying gear that weighs as much as she does, killed animals for food during survival training and practised jumping out of planes to get behind enemy lines.
But Jannike, a pony-tailed 19-year-old from northern Norway, will only concede that she's "pretty tough".
She is part of the Hunter Troop, the world's first all-female special forces training programme.
"I wanted to do something bigger, the toughest the army could offer me," Jannike says. "I wanted to [see] how far I could push myself."
After six months, despite some "really low moments", she is determined to get through the course.
Next up on the training schedule is close-combat fighting and offensive driving.

The Jegertroppen, as it is known in Norwegian, was set up in 2014. Military commanders here say that the war in Afghanistan proved an "operational need" existed for highly-trained female soldiers who could gather intelligence and interact with women and children during deployments in conservative societies. 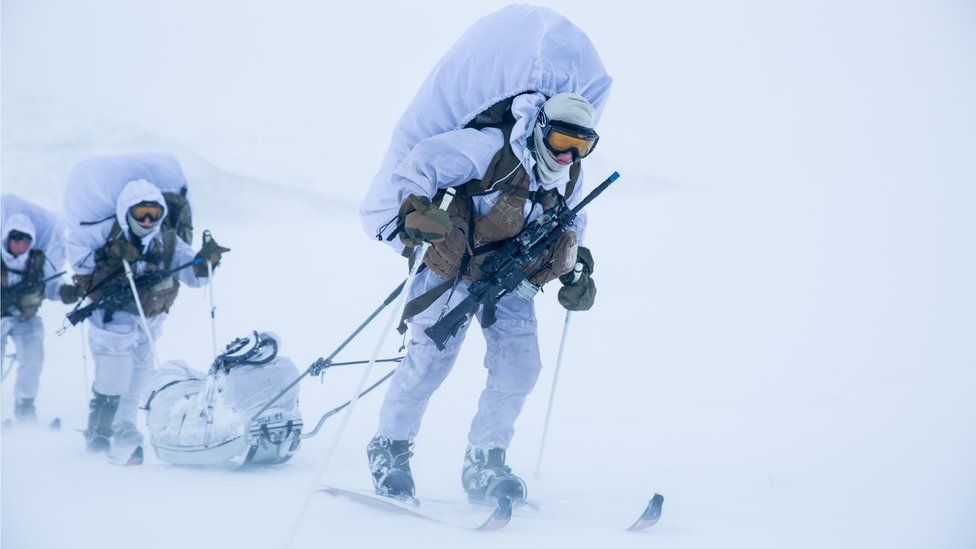 What began as a kind of experimental programme is now seen as a major success. More than 300 women applied in the first year, and about a dozen recruits are now passing the gruelling training annually, providing a pipeline of elite women soldiers that can be deployed at home or abroad.
The hardest part so far has been "hell week", says Jannike, a test of mental and physical strength involving long marches over several days with little time for rest, and minimum amounts of food and water.
"They just see if you can handle the pressure when you're down," she says. 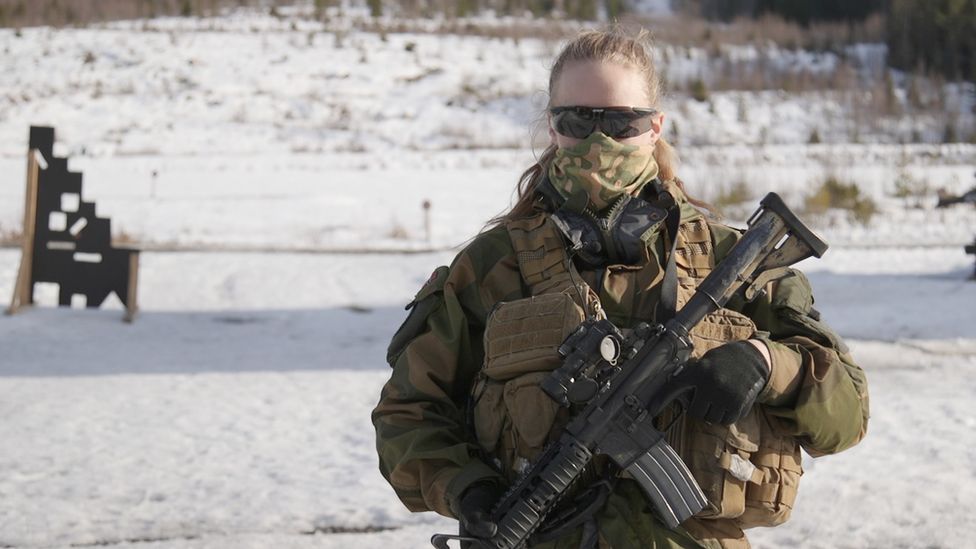 The young women are today practising fighting their way out of an urban ambush. They work in teams of two: taking cover behind burned-out tanks, providing suppressive fire with their H&K MP7 sub-machine guns and throwing smoke grenades so the team can get out safely.
Every time they hit one of the metal targets in the snow-covered expanse ahead, a clear "ding" rings out, to the approval of Captain Ole Vidar Krogsaeter, who oversees their training.
"To prepare them we try to give them the best training possible, as realistic as possible," the veteran special forces operator says. "We have them go through the exercises so many times that they are comfortable with it." 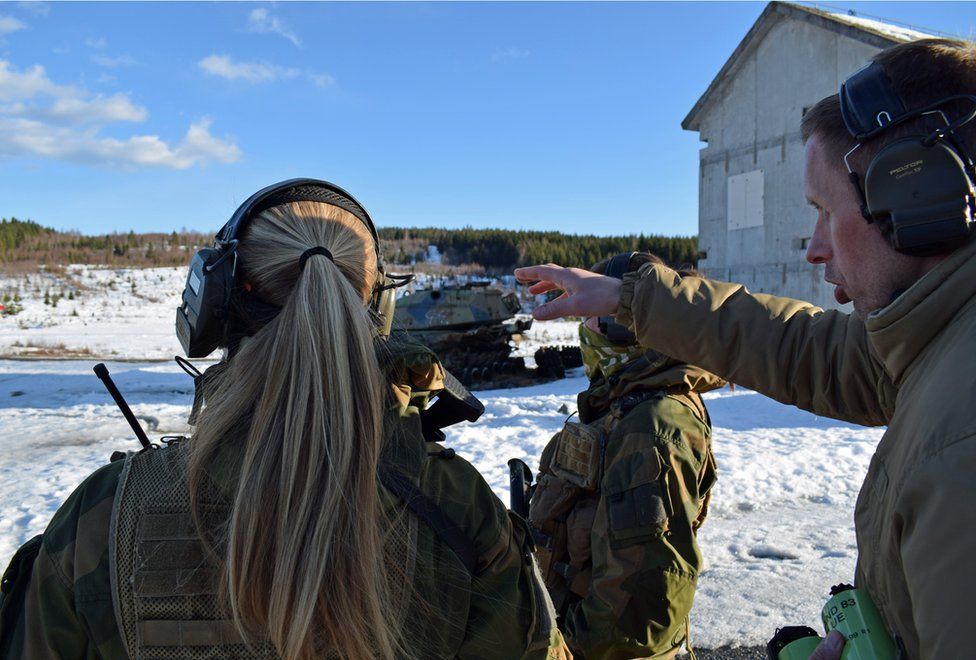 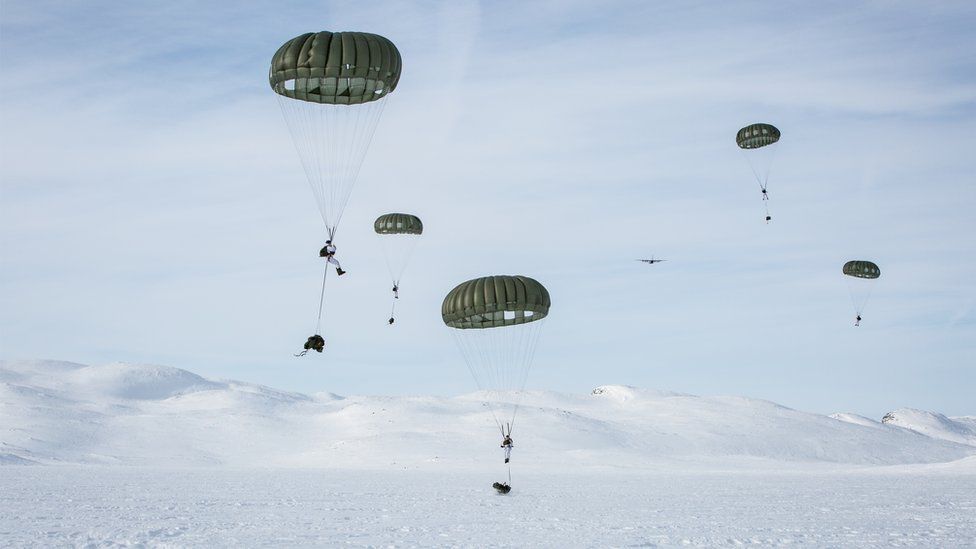 In between rounds, the women, who are all aged between 19 and 27, rest, and the dynamic changes completely.
They sing, and joke around. Three women sprawl out on an equipment box, enjoying the brief downtime. Later they light a fire, and get a barbeque going.
Back in the mid-1980s, Norway became one of the first countries in Nato to allow women to serve in all combat roles, although the numbers actually doing so have remained low. Women were allowed to apply for the special forces, but none had got in.
The United States and Britain, in comparison, have only recently begun lifting restrictions on women officially enlisting in combat units. 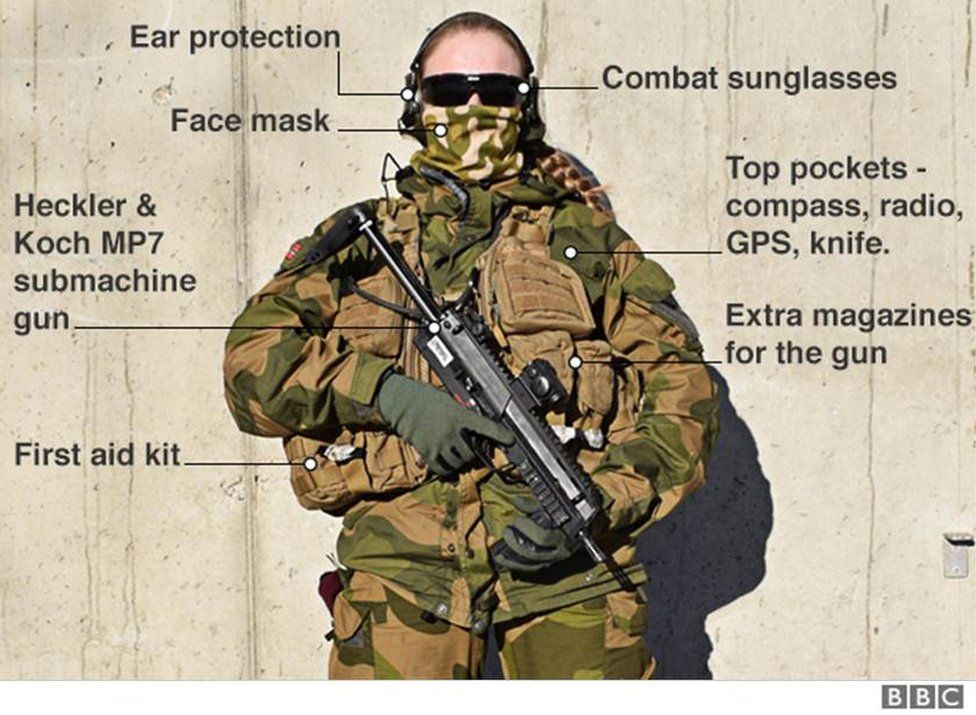 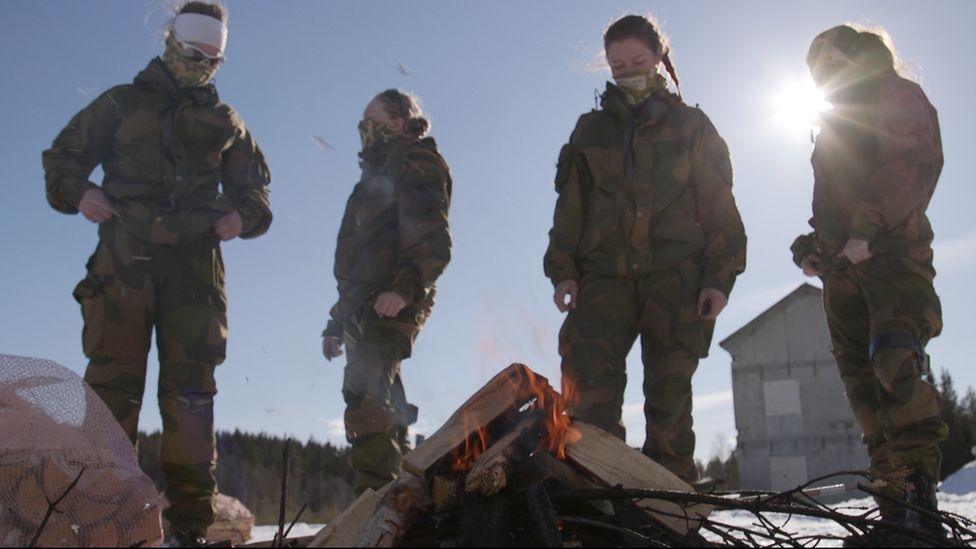 Special forces soldiers in the US have shown particular resistance to the changes. A 2014 Rand Institute survey of men in the US Special Operations Command found that 85% were against letting women do their specialised jobs, with 71% opposed to women joining their units.
The main concerns were that tough standards would fall and team cohesion could be affected.
But men also complained about the feared effects of pre-menstrual syndrome (PMS), dealing with their wives' complaints, and the effects of having segregated living quarters.
Magnus, a male Norwegian special forces soldier who has trained the Jegertroppen, doesn't have patience for what he calls "man-made" problems.
Male and female soldiers mostly share rooms in Norway, and PMS is "not an issue at all" in training, he said.
He recognises that there are some valid concerns: most pertinently, the ability of a female soldier to quickly carry a wounded male counterpart to safety. 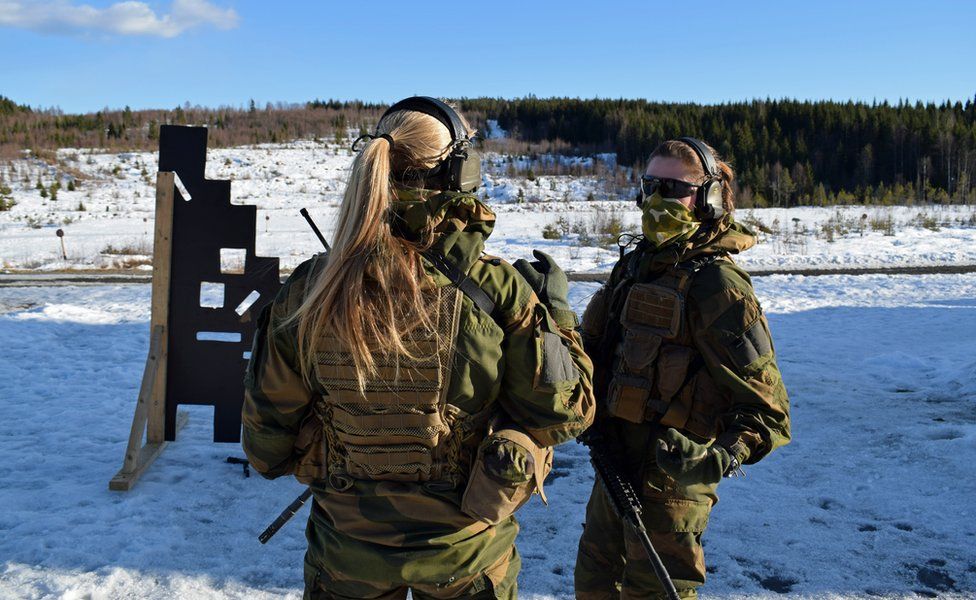 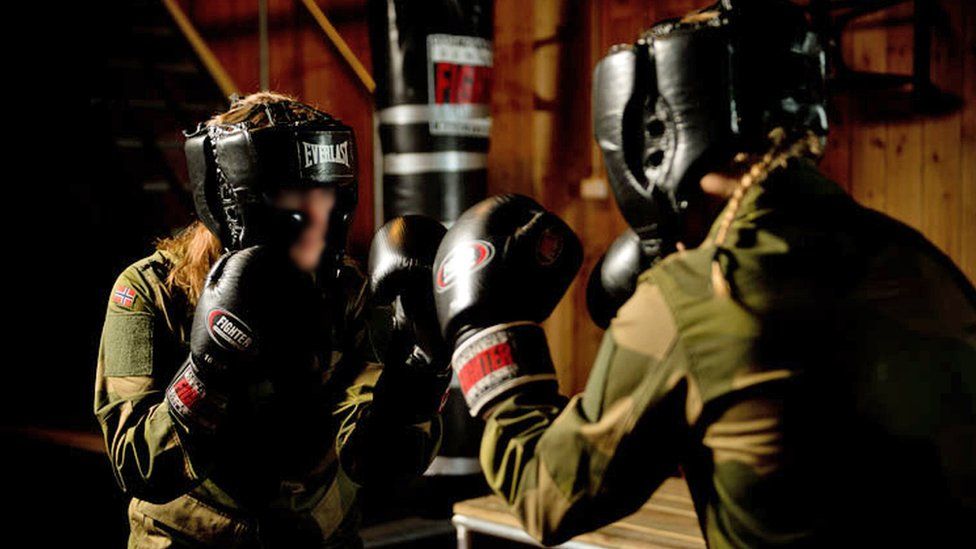 Still, he adds: "I don't think you should view it as the girls are gonna do the exact same as the guys.
"They are not going to win hand-to-hand combat, but most of the time we use guns and a lot of the time they shoot better than the guys."
Could you pass the unit?
Requirements to complete the course:
15km (9 miles) speed march in full gear (22kg backpack, weapon, boots) through forests within two hours and 15 minutes
Six pull-ups
50 sit-ups in two minutes
40 push-ups
3km run - maximum time 13 minutes
400m swim, first 25m underwater - maximum time 11 minutes
Most of the members of the Jegertroppen were elite high school athletes, but they bring other strengths to the table apart from their physical capability.
Venderla, 22, passed the course last year. "Women think outside the box," she says. "Men just do what they are supposed to do. Maybe we are more capable of seeing another solution, a better solution."
Although gender equality is well-entrenched in the Norwegian military - as it is in the country's society - just 11% of personnel are women, reflecting halting progress in recruiting and retaining females.
This compares with 10.2% in the UK and more than 15% in the United States. 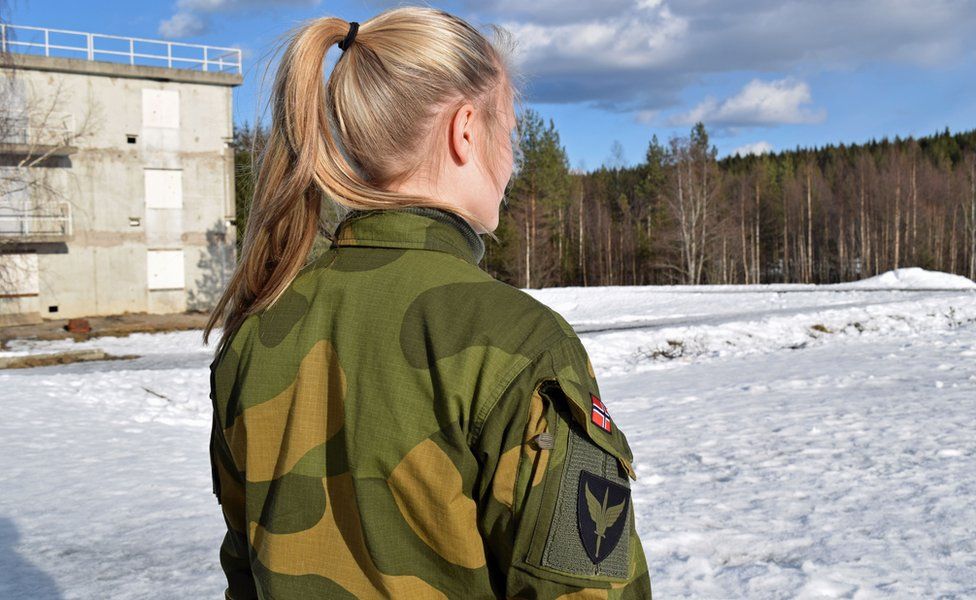 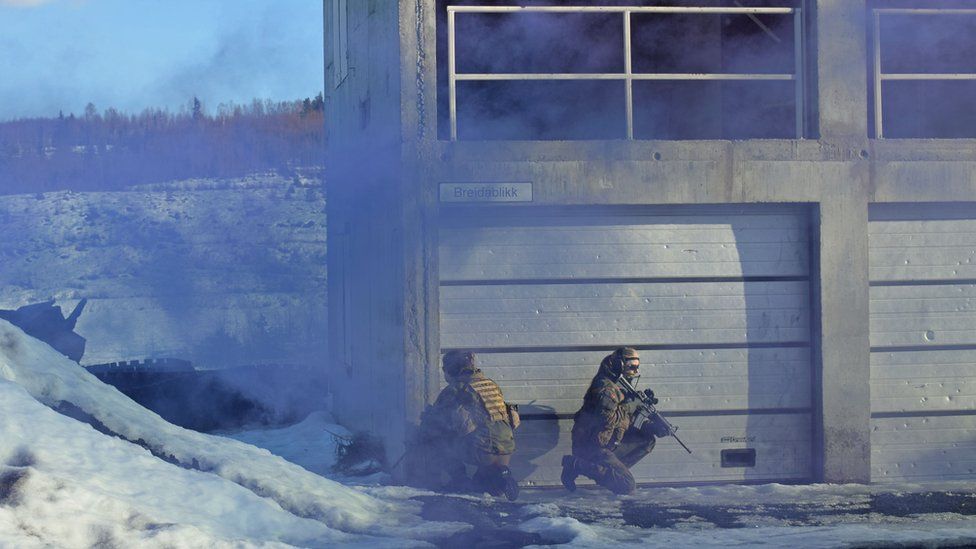 Conscription was extended to Norwegian women last year and they made up about 25% of the 8,000 youngsters recruited, meaning the share should increase over time.
Venderla says she has not experienced sexism in the special forces, but has in another battalion.
She was told by some soldiers that she was weaker and less capable as a woman, and one man made sexual comments, she said. The problem stopped after she complained.
"I think he was maybe a little insecure. I knew I was good enough passing the tests so it's his problem."
Norwegian special forces are currently deployed in Jordan, helping to train Syrian rebels in the fight against so-called Islamic State.
None of the women who have passed through the Jegertroppen so far have been deployed on a special operation, but the commanders say that the important thing is that they are trained and ready should the need arise.
Jannike speaks calmly but with conviction. She says that in a peaceful country like Norway, it's difficult for her to keep in mind during training that they are actually "learning to kill".
"But I try to have that perspective, because that's what we're really training for."